Farm – one of the main functions of the bot.
Farm function is available in the Standard and Elite editions.

1. Farm using farm-list of the bot
This mode includes a detailed analysis of the reports, collection statistics of the farms, automatically adjusts settings and much more.
The mode is intended for hard or troubled farms, which require attention.
Read more about setting up this mode below.

To enable automatic farm you need to:

Travian Bot allows you to make an unlimited list of farms and specify for the each farm individual amount of troops needed for farming, interval between raids, as well as other parameters that will be discussed below.

Farms in the farm-list can be added in two ways:

Adding farm from the map 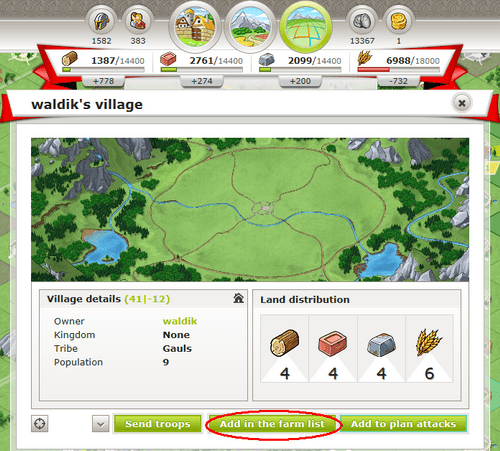 Open village that you want to farm on the game map and press “Add in the farm list” link
In the window that appears, select the properties of the farm (more about the properties below) and click “OK”

Search through the map.sql file (only for T4)

Farm settings
Each farm can have own parameters. 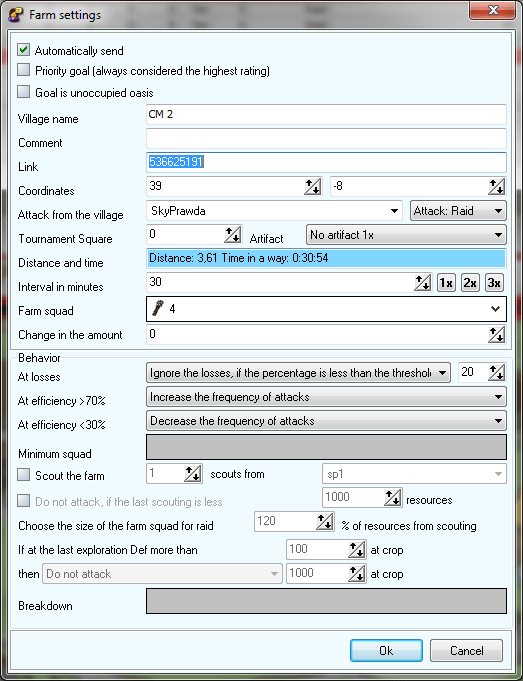 Send automatically – enables / disables the automatic sending of troops in a farm.

Priority goal – with a limited number of troops to farm, the troops will be sent to the priority goals firstly.

Goal is unoccupied oasis – enable if the target is a free oasis. Losses of troops in raids will be ignored. Bot will check the absence of animals and is oasis still unoccupied. If oasis are occupied then farm will be disabled.
If the animal is absent, an ordinary farm squad will be sent. In the case of animals, depending on the settings, the bot will send a breakdown to kill animals or skip sending troops and try again later.

Comment – you can write a text note here. If the bot for some reason disable this farm, reason of disabling farming will be shown here.

Attack from the village – in the drop-down lists you can choose from which of your village the troops will be sent to this farm, and type of attack (attack or raid).

Arena and artifact – the level of the arena, and the artifact used to calculate the move time of the selected farm unit.

The interval in minutes – preferred interval between sending farm squads. Button 1x, 2x, 3x automatically select the interval to maintain one, two or three attacks on this farm at the same time.

Farm squad – selection of types and amount of troops sent to attack.

At losses – select preferred reaction on loses in farm squad, available options:
Stop farming for any losses
Ignoring losses
Ignoring the losses if they less than a specified percentage of the size of the farm squad

At efficiency > 70% – this setting allows you to specify the reaction of the bot, if the farm squad often comes out from this farm full or nearly full, the possible options:
Increase the frequency of attacks
Increase the size of the farm squad
Do nothing
(this function is only available in the Elite edition)

At efficiency <30% – this setting allows you to specify the reaction of the bot, if the farm units often comes out from this farm without bounty or nearly empty. Possible options:
Reduce the frequency of attacks
Reduce the size of the farm squad
Do nothing
(this function is only available in the Elite edition)

Minimum squad – if selected “Reduce the size of the farm squad” in the “At efficiency <30%” option, here you can specify the minimum number of troops in the squad, farm squad will not be reduced below.
Also, when enabled “Scout the farm” options, if calculated farm squad size will be less than the specified minimum, the minimum farm-squad will be sent (available in the Elite edition).

Scout the farm – This setting allows you to configure the bot to scout farm before raid. When this function is enabled, “Farm squad” option set not a fixed troops amount, but the types of troops and the proportion between them. The size of the farm squad will be calculated depend on the amount of resources in the scouting log and capacity of selected types of troops.
(this functionality is only available in the Elite edition)